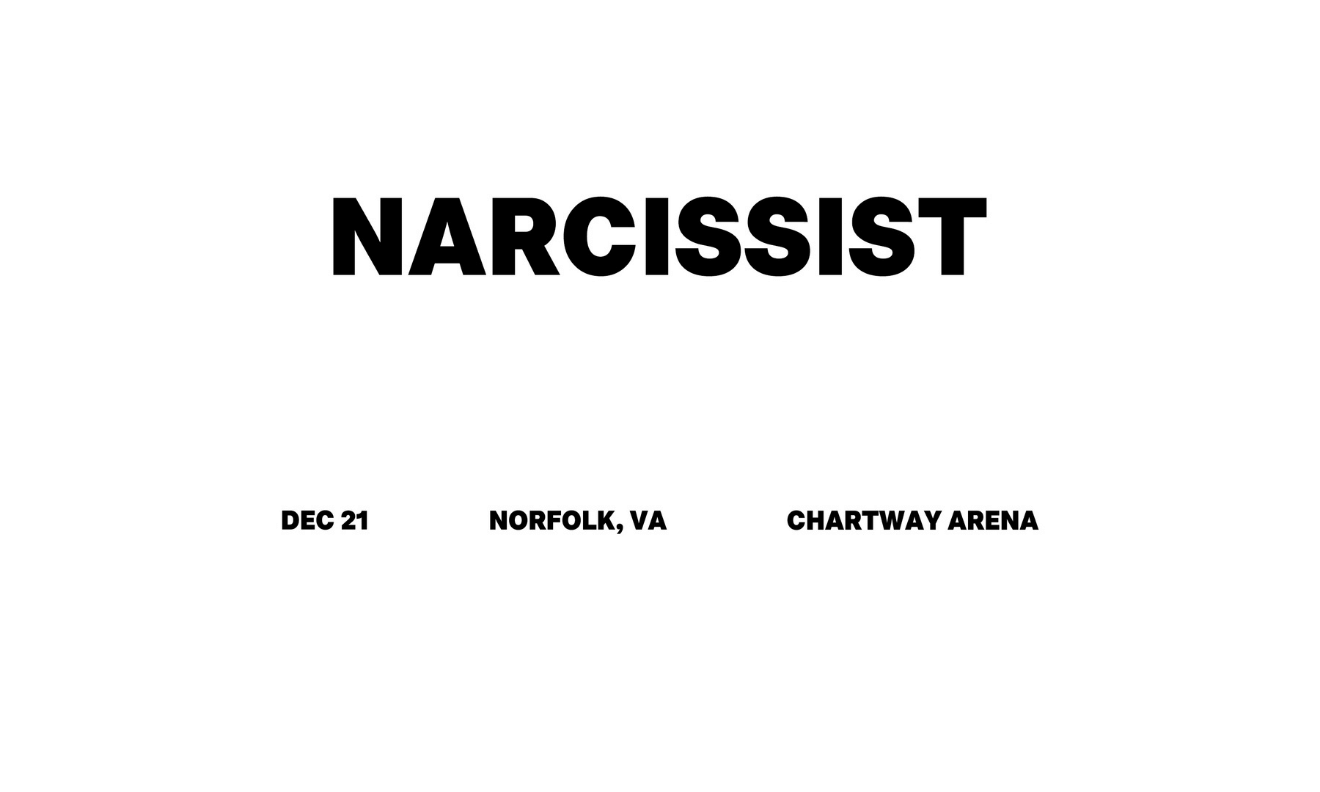 IN NORFOLK THIS DECEMBER

(September 1, 2021) —Today, genre-defying rapper Playboi Carti has announced his upcoming fall 2021 tour “NARCISSIST.”  He brings the tour to Chartway Arena in Norfolk on December 21st.  Tickets go on sale to the public Thursday, September 2nd at 10AM.  Tickets are available at YnotTix.com.

This is Playboi Carti’s first headline tour since 2018, when he took several cities by storm in support of his sophomore album Die Lit. Carti will continue to wow audiences across the country with his electric live performances and unique fan experiences on tour this fall! Get your tickets at playboicarti.com.

In January, Playboi Carti landed his first #1 album on Billboard’s 200 Chart with Whole Lotta Red. The album, released on Christmas day, sold 100,000 units and received 160 million global streams within its first week. In addition, Whole Lotta Red trended #1 upon its release on Twitter, and tracks from the album held 3 out of the top ten trending spots at YouTube including #1 upon release.

Whole Lotta Red features 24 tracks with appearances by rap superstars Future, Kid Cudi and Kanye West. This is Playboi Carti’s second studio album, following Die Lit which was released in 2018 and debuted at #3 on the Billboard 200 chart. It has clocked over a staggering 1.6 billion streams for its tracks to date.

In just a few short years, rapper Playboi Carti has amassed millions of streams worldwide, with a global appeal that has steadily placed him within the upper echelon of new stars. Carti has been unstoppable since the release of his 2017 single “Magnolia,” as its meteoric rise garnered cosigns from Beyoncé and features on series like Atlanta. His self-titled album has accumulated over 4.4 billion streams to date after debuting at number 12 on the Billboard 200 chart where it spent 63 weeks. The following year, Carti dropped his album Die Lit, debuting at Number 3 on the Billboard 200, boasting collaborations like Lil Uzi Vert on “Shoota,” “Poke It Out” with Nicki Minaj, “Love Hurts” with Travis Scott and many more. The album has 4.5 billion global streams to date and spent a total of 111 weeks on the Billboard 200. In April of 2020, Playboi Carti returned with track “@MEH,” and on Christmas day, he landed his landed his first #1 album on Billboard’s 200 Chart with Whole Lotta Red, which features Kanye West, Future & Kid Cudi, and has amassed a staggering 1.1 billion global streams to date. His second studio album sold 100,000 units and received 160 million global streams within its first week. In addition, Whole Lotta Red trended #1 upon its release on Twitter, and tracks from the album held 3 out of the top ten trending spots at YouTube including #1 upon release. It has spent a total of 29 weeks on Billboard’s 200 chart since it dropped in December 2020. With a constant string of hits, Playboi Carti doesn’t miss.

Outback Presents is the leading independent, full-service promoter of live entertainment. Based in Nashville, Outback Presents produces thousands of music and comedy shows, tours, and festivals annually across North America and connects its diverse roster of artists with their fans.

Chartway Arena is a 9,100-seat multi-purpose arena located on the campus of Old Dominion University. Operated by Spectra Venue Management since it opened in 2002, Chartway Arena is known as one of the premier mid-sized collegiate venues in the country.  Chartway Arena is home to Old Dominion Monarch Men's and Women's basketball, as well as concerts, family shows and other attractions for the Hampton Roads area. Visit www.chartwayarena.com for more information on upcoming events.